Difference Between Fruit and Vegetables.

Ask a gardener or a botanist, and they will both have the same answers, but include a chef in your research and the lines become blurred somewhat. Yes there are very distinct fruits that we all know and accept as such wherever in the world we live; a banana being a typical example. (Though sometimes it is used more like a vegetable in some cooking!)

The pure botanical difference is that to be a fruit it has to have developed from a flower ovary – normally as a sweet fleshy, often juicy food that will sometimes have the seeds within – or attached. Flowers produce seeds which in turn are classed botanically as fruit!

There is no botanical classification of ‘Vegetable’ but colloquially all plants are sometimes referred to as the ‘Vegetable Kingdom’ – hence the descriptive inclusion in the 20 questions game of “Animal, Vegetable or Mineral”. 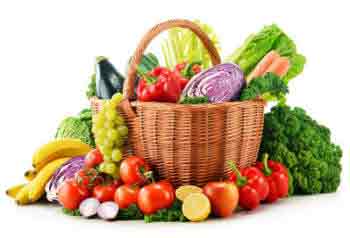 Fruit is a different matter for it is defined in botany as being the part of a plant – normally fleshy - that either encases seeds or is otherwise intimately involved with the seeds. Strawberries for instance do no ‘encase’ seeds for the seeds are on the surface of the fruit. Taking it a stage further, fruits started life as a flower which after fertilization became seeds.

Culinary Uses of Fruit and Vegetables

The general usage of the terms fruit and vegetables are normally allied to plants, or parts of plants that can be eaten. Herein the arguments and questions start! The favourite being “Is a tomato a fruit or a vegetable?” A botanist or horticulturist will have no hesitation in naming it rightly as a fruit. It is the product of the flowering part of a plant and is the protective coating of the seeds.

Chefs on the other hand will know – rightly – that tomatoes are one of the many vegetables that they work with. So too are peppers, aubergines and cucumbers. You do not include tomatoes, peppers, chilies or cucumbers in fruit salad though each is classified botanically a fruit!

Vegetables are seemingly easy to classify as such for they are generally defined as being the other edible parts of the plant – stems, leaves or roots. The sweet potato, whilst it is undoubtedly fleshy and somewhat juicy and as its name suggests, fails to classify as a fruit for it did not start life as a flower – but as a modified plant stem. It is not a root – even though growing underground. It has all the attributes of a stem, including ‘buds’ or eyes as they are called. Tubers are modified stems.

Botanically a fruit developed from a flower ovary, which then produced a seed or seeds and very thoughtfully ensured the safety of the seeds by wrapping it in a protective coat. This will include shells of nuts for they too are botanical fruits.

Some botanical fruits are used as vegetables – as above.

Taking the botanical coat off, a vegetable is any other edible part of the plant – leaves, stems and roots or tubers etc.

Rhubarb – an ingredient of many sweet dishes is not a fruit! They are stems.

So - fruit vs vegetables? Whichever, they are all good and healthy to eat, and relatively easy to grow. Enjoy!