The attractive bark on many shrubs can give you true winter colour in your garden for up to five months. Colour and interest that hits you right in the face; not needing you to go searching for it beneath leaf litter, hidden in a mass of evergreen foliage or only appearing when the sun is out. Winter coloured stem bark on shrubs is not as popular as some of the choice flowers that put in an appearance for a short time in selected winter months. It should be!

Other than the vibrant colours available, shrubs with coloured bark effect have a low maintenance regime. Cut the shrubs back to near ground level every spring – job done. An added attraction being that the shrubs never suffer from the basic shrub gardening problem of outgrowing their position. 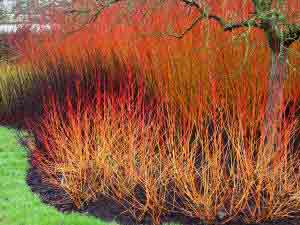 The best effect with all the under-mentioned shrubs is if they are planted either in full sun, or maybe having the low winter evening sun filtering across. All need to be pruned hard in spring – no later than end may to enable the new growth to materialize in the summer ready for your winter wonderland.

Bear in mind, that as you are taking so much growth away from the shrubs, they will benefit for at least a good annual mulching and better still, an application of general fertiliser either before or immediately after the pruning.

The universally used groups of shrubs, used for their red bark effect in the winter are varieties in the Cornus group - the dogwoods. ‘Dogwoods’ because of their bark? - Who knows, but sounds probable.

Not all dogwoods have red bark, together with which, some are distinctly redder than others.

Best of the red bark dogwoods by far is Cornus alba ‘Sibirica'. The only turn off is that it has normal green foliage. Six months of spectacular red stems in the middle of winter must surely make up for that. 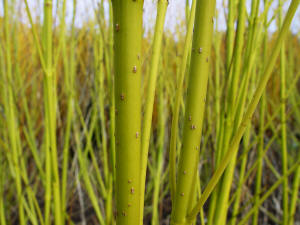 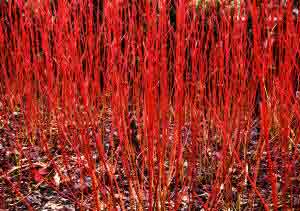 Don't  overlook the fact that the dogwoods should be cut back to near ground level in early spring, so foliage will not be fully visible for a month or so as the new stems start to grow.

We have to settle for ‘near’ black or ‘seemingly’ black so as not to deceive. Again it is dogwoods that are first choice.  Cornus alba ‘Kesselringii’ is always described as having black bark – we go with darkest purple. But also add to that, stunning dark purple autumn foliage as well. Black bark can look attractive even in winter - especially if combined with other lighter coloured stems.

Salix daphnoides makes it onto the white stem list – just - mainly because it will also have the attractive pussy willow catkins in late spring – before cut back. The common name is violet willow.

Orange bark and stems for winter.

For the best orange stems, decide between moderately growing Dogwood, and slightly more vigorous willow. The Dogwood which is absolutely stunning for winter colour would be Cornus sanguinea ‘Midwinter Fire’ – look no further for a stunning stem spectacular. Oranges intermingled with gold and red.

The Willow for choice would be Salix alba ‘Yelverton’ ideally pollarded onto a 1m high main stem to give a bit of height over frontal planting of Cornus, or underplanting with low shrubs or Cyclamen Coum.

Green stems do have a place – especially for winter and even more so if they come from yet another Cornus – Cornus stolonifera ‘Flaviramea’. Bright lime green/yellow stems. It suckers to form a dens thicket.

Another for good green canes in winter, would be the Kerria japonica ‘Pleniflora’. I doubt that you will ever see it recommended for its stems, but cut back had after flowering and you will be rewarded by stunning light green foliage throughout the summer and long upright canes through the winter – waiting to burst into flower late spring.