Without doubt, Ground Elder is one of the mast hated weeds to be found in the garden. This includes Ground Elder in lawns, which in spite of being mown regularly is is quite a persistent pest.

Your own garden can be well cared for and spick and span, but then suddenly from under the dividing fence, Ground Elder can creep through from a neglected neighbours patch.

In spite of its common name, Ground Elder is not related to the Elderberry shrub Sambucus but is a creeping herbaceous perennial with the correct botanical name of Aegopodium podagraria. You can be forgiven for not remembering that mouthful, for the common name of Ground Elder is universally used (Other than by botanists.) Other common names include Gout Weed; Bishop Weed; and Jump about Weed: It does not jump it creeps!

Ground Elder was reputedly bought into the UK by the Romans quite a while ago! You may ask why? Quite simply, Ground Elder is classed or described as some, by an edible perennial vegetable. Yes it can be eaten, but that is beyond the scope of this article. Here we talk of controlling or preferably killing Ground Elder!

What is Ground Elder? 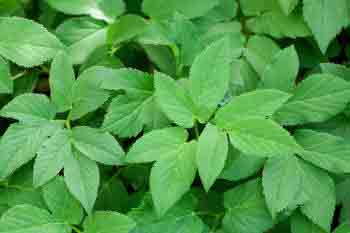 It is a herbaceous perennial weed which is to say that it dies down in the winter month; only to re-emerge in early spring.

Ground Elder is a low growing invasive weed that creeps relentlessly with its underground stems - rhizomes; sending up its young shoots which develop into a ground covering canopy of quite attractive foliage pinnate and light apple green in colour. It is not particular about any type of soil or in fact sun or shade. Basically, anywhere anything can grow is ok by Ground Elder. It will happily invade to poorest of soils and compete with any garden plant including mature lawns if allowed to spread.

Why it is not classed as a notifiable weed I do not know for it causes widespread problems such as Japanese Knotweed, and in its way is just as troublesome but smaller.

The weed is happy threading its way through cultivated borders or patches of waste ground. Anywhere is its preferred habitat. It lives the year round, and just because you cannot see it in the winter months does not mean that it is not continuing its relentless spread to any surrounding ground underground . It will be!

Ground Elder also seeds itself if allowed to flower first flat umbrella heads of white flowers. Otherwise it creeps under fences and the like to emerge in your garden during the spring. The first shoots to emerge are pale green upright stems which soon send out its pinnate leaves.

It is not unknown for some root scraps to be imported from the purchase of rootballed shrubs in the autumn or winter. The white fleshy stems will be hidden, within the rootball hessian and soil. The first you will see is in the spring when the tell tale young shoots will start to emerge at the base of the newly planted shrub or tree!

There are two basic ways in which you can control, treat and kill Ground Elder. With a 'safe' weedkiller or by dubious organic methods. We outline the basic of both method on how to kill ground elder.

If you have a natural aversion to Chemicals in the garden, jump down the page to the organic methods then come back here in desperation when you need to get serious about killing ground elder.

There are three methods of chemical control for ground elder..

Ground Elder which has spread into the garden and maybe between plants or in borders, can be controlled and even killed completely with a weedkiller containing Glyphosate. These include Tumbleweed and Roundup. There are others. The main thing is to ensure on the label, that the killer contains Glyphosate and no other chemical killer.

Glyphosate is applied and onto the foliage of plans you wish to kill. The more prolific the foliage the better the result will be. There is very little to be gained by applying to young perennial weeds. So it is not generally a suitable weedkiller for use in early spring. The weeds need to be in full growth even to the stage of flowering for Glyphosate to be most effective.

Be aware that Glyphosate will kill all other plants it is sprayed on to this includes lawns!

Do not use a fine mist spray which will drift on to the foliage of your favourite plants. A watering can with a fine rose attachment is ideal for application. Protect other plants from the spray by some form of barrier whilst applying. A hand held sheet of plywood is ideal to shield neigbouring plants.

READ THE LABEL FOR APPLICATION RATES DO NIT OVER-APPLY

Treating Ground Elder with weedkiller is relatively easy for it will have formed a low growing canopy of foliage, so easier to protect the stems and foliage of other garden plants during application. Mid-summer is generally the most effective time, when the ground elder is growing well. It is a mistake to try and prevent it from growing; let it grow and zap it!

Apply in the evening or very late afternoon when there is generally less air movement, and it will give the weeds plenty of time to be absorbed into the plant, and then down into the root system.

You will probably need an addition application in late summer or early autumn for the stubborn bits that start to re grow. You may also require just one more lesser treatment the following summer.

Do NOT use Glyphosate weedkiller on lawn weeds, for it will also kill your grass.

Use a proprietary lawn weedkiller such as Verdone, which kills weeds but is selective so does not kill the grass. This method will probably kill off the lawn based ground elder in one application. Again, let the ground elder grow, by not mowing for two weeks before application.

Any other surface where plants do not grow, and where plants are not wanted to grow, can be treated with a chemical that contains Glyphosate which will kill the existing weeds and also contains a pre-emergent weedkiller chemical to prevent new weeds from growing. The double action chemical is generally best for this situation.

Bayer Ground Clear Weedkiller contains three chemicals including Glyphosate, then will ensure a cleared surface after treatment. DO NOT USE THIS WHERE YOU HAVE OR WANT PLANTS. It is a total weedkiller meaning it will kill all!

Digging ground elder out is a thankless job that even if you succeed, will probably take you a year or so. Remember also, th at this pernicious weed is possibly in neighbouring gardens as well, so you have to be very persuasive if you think you can involve others! If you try, then you will need initially to dig and turn over the entire are a where the Ground Elder is, and remove all of the white roots and rhizomes. Tease them out from the root systems of other plants, for every scrap of plant tissue you leave is a potential new weed infestation. You will only kill the ground elder once every scrap of it is removed from your garden.

Do not put the roots and stems of ground elder on the compost heap. Either dispose in a bin, or to be sure put it all in sealed black plastic bag, then place it in a sunny position for a few weeks!

After the initial sortie you will need to visit the affected area every two weeks at most; thats how quickly it grows. Carefully find each of the new shoots and hoe them off at or just below ground level. This may take a year or so! Very unlikely you will succeed in a single year. Keep at it and dont let up the search.

If it is a large unplanted area that is affected, you can cover it with a black polythene sheet pinned down at the edges. This may be removed after a few months and you can pick out the creeping rhizomes that are to be found. This is a certain way to kill ground elder and rid yourself of the problem - however it is a method that excludes all other use of the covered patch for most of the year.

Pin down the sheet for a few more months maybe a year - to finish the job. (As far as the plants under the sheet are concerned anyway.)

Ground Elder will invariably find its way to the edges of the sheet and make a pleasant looking border. Dont be fooled!

This plastic sheet method is ok for new allotment plots and the like. Whilst it is listed here under organic it is far from an organic solution , for all of the beneficial micro organisms under the sheet will suffer also the basic structure of the soil.

Still think that is organic?