How to Kill Ivy Plants and Roots.

Ivy growing up trees, ivy up walls, ivy in and around the shrubs, coming in from the neighbour's garden etc! Most of us will have experienced this problem weed at some time in our gardening lives. Yet it can be killed - dead and gone!

There are two basic ways to kill Ivy and its roots. (Forget about digging it out unless it is just a mite of a plant). The best time to tackle ivy is in the late winter - just before the spring growth starts.

Cut the ivy down to ground level, getting rid of all of the foliage - every bit of it. This can probably best be done with a heavy duty strimmer, or a pair of garden shears. Take extreme care if using the strimmer. As the Ivy starts to re-grow in the spring, just keep cutting all of the new leaves and growth off. Don't even leave one leaf to grow. Eventually this will starve the roots of the nutrient it gains from the leaves, and they will die out. It is one way how to kill ivy roots.

Variegated Ivy - whilst an ornamental plant - can also be invasive, so steps are sometimes necessary to eradicate it.

Ivy (Hedera helix being the common English Ivy) will often form a dense ground cover over a patch of garden. This mat of ivy can be controlled and ultimately killed in one of two ways – chemical weedkiller control or black plastic sheet.

It is highly unlikely that the patch of groundcover ivy will be in a regular shape, but a plastic sheet can still be used to kill a large portion of it. Alternatively – depending upon what other plants are growing in or near the ivy cover, a few applications of chemical weedkiller can be utilised to bring it under control of kill it off completely – roots as well (important). 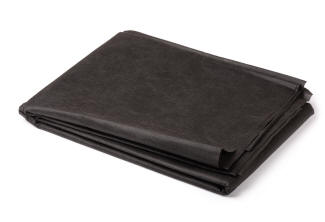 Whichever method you decide upon – either use a garden strimmer to remove as much existing growth – or simply don a pair of wellington boots, and trample the whole lot down. This will have the effects of ‘softening up the foliage which will be necessary for the first application of weedkiller to have a good effect, and also flatten the area ready for a plastic sheet.

For a weedkiller solution, proceed as outlined below by treating all of the new growth that appears after the initial application. Do this as soon as the leaves start to grow – after the first growth of foliage.

If using the black plastic sheet method, it will have to be weighted down – particularly at the edged in order to exclude all light. That which starts to re-grow around the edges of the sheet – as it will do – can either be spot treated with chemical or after a few months the sheet can be removed, leaving you with a lesser area to deal with than before. The remaining ground covering ivy can either be regularly strimmed or cut with shears, but falling back on some form of weedkiller application to finish the job properly.

If you decide to use a chemical for killing the ivy - be patient. It will take a few applications. It is best to cut back as much growth as you can - late winter is a good time again. Then, as the new foliage starts to grow, treat it with a weedkiller containing Glyphosate. (This is totally harmless to the soil - however it will damage or kill any other plant that you spill it on!). I find that the older leathery leaves do not seem to absorb the chemical like the new growth does. It is no use trying to kill the roots by treating them with Glyphosate; it needs to be absorbed via the foliage - that is the correct way how to kill ivy roots

It will take a couple of weeks before you see any 'progress'. This is because the Glyphosate is working its way through the plant - having been absorbed by the spray on the leaves.

Each individual case will call for a certain method of application. Either spray; apply with watering can with fine rose; or even brush it on to the individual ivy leaves if it growing amongst plants you wish to save. It may take three or four applications to finally get rid of the ivy - but it works!