Sphagnum Moss Peat in the Garden

Sphagnum Moss and Sphagnum Moss Peat are widely used in the garden environment. The moss is used as hanging basket liners, moss poles and other varied uses such as the ingredient for air layering. The peat is used in many potting composts; as garden mulch; soil enrichment, and acidifying soils for ericaceous plants such as Azaleas or Rhododendrons.

Sphagnum moss is a living entity that lives in bog or moist areas – notably in Ireland – from where the peat product is well marketed as Irish Moss Peat! Sphagnum moss is often found and harvested – illegally – from woodlands throughout the UK, where it can be found in shaded areas, growing on the damp soil or even on tree trunks. It is a favourite for florists and floral decorators, being attractive and water-retentive, owing to it long strand-like growths of mainly hollow cell structure that can retain moisture.

The by-product of the moss, growing in boggy areas, is the peat. Whereas Sphagnum moss is a live growing plant (unless dried) sphagnum moss peat is lifeless, though with the ability to support plant life – quite unselfish! 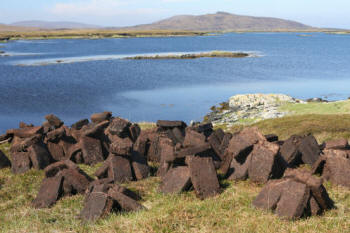 This peat is often wrongly referred to as ‘peat moss’, whereas it should be called  ‘moss peat’, for it is peat derived from the moss which has long since departed life. No matter – call it as you will – for me I will stay with that which I consider to be correct – moss peat! The other main type of peat is sedge peat; that which is harvested from sedge (rush) bogs – but as far as I am aware nobody calls is ‘peat sedge’!

The peat is dug out of the old sphagnum moss bogs and is a large industry in Ireland in particular. The peat will be many hundreds of years old – in an arrested state of decomposing. As peat briquettes it is used for domestic and commercial fire fuel – much the same as coal once was.

For the gardener, the blocks of peat are ground into a fine but fibrous inert organic material which seemingly endless uses. Together with that, sphagnum moss peat is used for soilless composts for the amateur and professional grower, or as a stand-alone product for a wide range of garden uses.

Sphagnum moss peat – as with the original sphagnum moss – is highly water-retentive owing to its capillary structure and 100% organic content. It is often referred to as being humus, which it is not – though it will eventually add humus to the soil when used in the garden.

Live sphagnum moss is capable of retaining around 20-30 times its dry weight. This is a property that is passed on to the peat from sphagnum moss bogs. This property alone is the main advantage of its use by gardeners and florists. As a compost base material, there are several other mediums which can be used, but none seem to have the same water holding capabilities as sphagnum moss or the sphagnum moss peat.

Moss peat is acidic with a ph scale of 4.00 or sometimes a little more. When used as compost, it is normally bought up to near-neutral ph level by the addition of calcium. Not too many plants thrive in low acid soils or composts. Together with that – when used as potting compost - the ph level is often inadvertently raised by using tap water, which in many areas is alkaline.

As an acid component, it is well suited to growing ericaceous plants, but again can be neutralized by the use of tap water – and by some fertilisers!

Moss peat is often used to try to lower the ph level of soils, so that rhododendrons etc can be grown, together with ‘blue’ hydrangeas – which require acid conditions. Over time, the indigenous soil water will percolate into the peat, somewhat negating its usefulness for this purpose. Raised beds made from peat with a little soil added, are a better bet, but again, the existing soil water will rise up through the highly absorbent peat, so over time this will need an added acidic remedy! Use of fertilisers with an acid reaction will help – such as those containing sulphate of ammonia as the Nitrogen content. Nitro chalk based fertilisers to be avoided!

There is no ‘food’ element to moss peat for garden mulches, soil conditioner, or for potting compost. To all practical intentions peat is an inert commodity – incapable of ‘feeding’ plants. If used for making compost, fertilisers will need to be added. Peat alone will not feed your plant. It’s main advantage for making compost, it its ability to retain moisture where the plant most needs it – at the root zone.

When peat is added to garden soils – either as an organic mulch or dug into the ground – it acts as a soil conditioner, by opening up the soil structure on clay soils; by helping moisture retention on dry sandy soils; and by feeding of the insects, worms ad bacteria that live in the spoil. Worms in particular help to turn the inert peat organic matter into humus as a by-product of its ingestion of all manner of organic debris in the soil.

Sphagnum moss peat makes good weed-suppressant mulch and helps to conserve the soil moisture below its carpet. But, be aware that for all its advantageous water retention abilities, it can soon dry out when used as a mulch layer and even blow away in gusty winds - if applied as a mere cosmetic ‘dusting’. This is alleviated to a great extent be applying the mulch to a depth of no less than 4i (10cm). This will help it to remain damp and stable.

Peat as a mulch soon gets taken down into the soil by earthworms – turning it into a humus rich mass which is down where it is most beneficial; near the plant feeding roots.