Sandy Soils - How to Improve - Choice of Plants


Sandy soils are those which have a larger proportion of sand particles than they do silt or clay particles. There is is ‘universal’ sandy soil, for they can vary considerably according to the type of sand, geo-location and factors such as organic content. It is possible therefore to have a very light sandy soil or one that verges on the classification of silt soil. Optimally, a soil which is classed as a sandy loam would be ideal. However, we rarely get to choose!

Several things are common to all sandy soils, such as the fact that they are normally warmer, easier to work with and better suited to earlier spring cultivation that clay or silt soils.

There are downsides as well! Sandy soils lose soil moisture by way of easy drainage which goes hand in hand with losing soil nutrients which ‘wash out’ with the soil water. This invariable means regular fertiliser application - to rectify the nutrient imbalance - together with copious additions of organic material such as compost – either spread as mulch or dug into the top few inches of the soil. 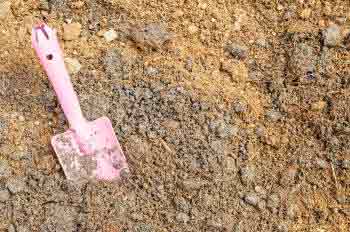 You can easily determine just how sandy your soil is by doing the simple coffee jar test. As well as seeing the amount of sand, you should also be able to see if it is a coarse gritty sand soil, or a smooth silt-like makeup.

Most sandy soils are slightly acidic, though some near neutral on the PH scale. Soils on the edge of – or in – woodland can consist of a fair proportion of organic content, built up over the years by the natural recycling of leaf litter and other organic matter. Such soils are normally nearer to acidity than neutral, so may – depending upon choice of plants to grow – require annual dressings of garden lime.

The actual physical mineral state of a sand soil is virtually impossible to alter – which is not to say impossible. However any importation of heavy soil will have to be done on a regular basis, for the natural leaching ability of the soil will negate any ‘alterations’ you try to do.

The best cultural way forward to improve sandy soils is by regular addition of organic matter. This will have to be done on an annual basis, for such soils are hungry for added organic fertility. Autumn mulch can quite disappointingly ‘disappear’ by mid-summer.

Regular watering is also a necessity which has to be carried out carefully so as not to artificially drain the soil of nutrients. However, unlike heavier compacted clay soils, the water so applied will more easily find its way down to the root zone of plants – rather than be ‘puddled’ on the surface.

Planting and Plants for Sandy Soils

The easiest way forward to have a god gardening display on sand soil, is the adjust yourself to the fact that you have that type of soil, rather than trying to adapt it to your way of thinking or gardening. This invariably means good choices for plants that will happily grow in sandy soils. It would be folly for instance to try to create a collection of willows or any other moisture loving plants. Far better to choose plants that will grow without too much attention or regular adjustment.

Whatever plants you choose, there would be a natural inclination to fill the planting hole with copious amount of organic compost, leaf mould or peat. Very commendable in any soil - just be aware that whilst all organic material holds moisture, over time and especially in dry weather that moisture will soon be ‘sucked’ into the surrounding soil upwards and sideways by way of capillary action. You cannot simply plant that way then assume that it is all that is required. Bear in mind also that some organic matter and normally sphagnum peat -  is not easily ‘wetted’ once dried out! You might instead, use a good dressing of horticultural vermiculite - if it is moisture retention you are aiming for.

Any fertiliser applied at planting time should be of the organic type such as bone meal which will not easily be dissolved and leached down through the soil. Slow release fertilisers are also suitable but again bear in mind that they rely on soil moisture to release their nutrients. Upon drying out, some effectively seal themselves until adequate moisture is again available. All feeds should be applied near the surface of the soil rather than down in the planting hole – organic or synthetic. Near the surface rather than on the surface is best.

Contrary to that, liquid feeding will of course be applied to the surface and eventually wash down to the plant roots.