How to take cuttings from plants

Cuttings can be taken from many plants, but shrubs and perennials (tender and hardy) are the normal choices.

Some plants, you just cannot grow from seed for practical purposes. Take for instance, the very common Forsythia. For various reasons, Forsythias are difficult to grow from seed, but they can easily be grown from cuttings – at almost any time of the year. Don't worry, most cuttings are easy; just follow our tips on how to grow cuttings into plants

Growing plants from cuttings is quite easy – once you are aware of the several things that can go wrong. Don’t stop reading, for there are also many things that go right when taking cuttings from plants.

Once you know how to grow cuttings, you will aqcire many new garden enthusiast friends! 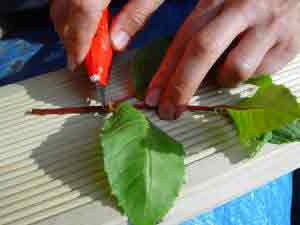 One of the attractions of growing plants from cuttings for the commercial grower is the fact that each new plant, is identical to the parent from which the cutting was taken. This is not always true of seed grown plants. As an example, if you grow 10 apple seeds (pips) into mature trees, then you will undoubtedly get ten different trees – none of them resembling the parent apple! More of that later!

Some of the plants which are best grown from cuttings are shrubs, perennials, hardy herbs and alpine plants. Most of there are either difficult to grow from seed, or at least take a long time to germinate and grow. Most cuttings are rooted within a few weeks or so, and the new plant can be persuaded to start growing as soon as you have put roots on it!

There are various types of cuttings to be taken. These include….

Hopefully the list of different cuttings has not put you off. Maybe even, it has got you a bit curious. Good! Here we go!

Before you take the cuttings.

There are a few common reasons why cuttings fail to root. The first thing to remember is the fact that when you take a shoot from a plant, you are immediately depriving it of its moisture source. Until you do your job properly, then it will have no roots through which to absorb life giving water. The foliage will collapse, and the cutting will invariably die. At ALL stages, you should do whatever you can to avoid this moisture loss. Once the cutting is inserted in its compost, the cutting and container should be made airtight with a polythene cover. This can simply be a clear plastic bag, or a sheet of polythene for larger projects.

The best time for collecting  cuttings, is in the early morning, whilst the parent plant is still turgid – full of water. Later in the day – if it is hot – the shoots may well be depleted of moisture. Cuttings can be taken later in the day, but extra care will be needed to conserve – and replace – any moisture. Popping your cutting material into a plastic bag, and keeping it out of the sun is a good start. Splash a few drops of water into the polythene bag - this will help to keep a good humidity level.

Cleanliness is important. Your cuttings knife should be clean. Various virus diseases can be spread by using a dirty un-cared for knife. The virus can be spread to each cutting that you take. This is sometimes a problem if you take many cuttings of the same plant types. For instance, enthusiast chrysanthemum growers can take many hundreds of cuttings of their plants – a virus on one plant can soon be spread to each of the cuttings via the knife.
A few cuttings of lavender or whatever will not normally be a problem.

After you take the Cuttings.

Once you have taken and prepared your cutting, the next stage is how to grow cuttings! The cutting should be prepared, and inserted into  cuttings compost right after taking it from the plant. Cover them with a plastic cover – either clear or milky white – as soon as it is inserted.  It is essential to do this . Moisture loss for the cutting is a big problem. Keep the new cuttings container out of direct sunshine.

Some cuttings can be rooted, simply by placing them in a glass of water. Done that? Mostly, they are inserted into proper cuttings mix compost – easily made up by yourself!

My favourite all-purpose mix is simply some peat based general purpose compost, with an added 25% of sharp sand. Washed sharp sand is best used, as builder’s sand often has high lime content. Alternatively, you can use either perlite or vermiculite instead of the sand. If using vermiculite, then go 50/50 with the compost. The added sand or vermiculite, simply ‘opens’ up the compost a little to allow free drainage, and also allows air to get into the compost.

Some cuttings can simply be rooted in moistened sand, but the new roots are normally brittle, and easily break off on potting up. Nevertheless, a sand bed outdoors for autumn cuttings of shrubs, is a great way to put roots on shoots!

As well as having ingredients to assist the cutting to grow roots, most hormone powders or gels will also have a fungicide. This is useful to prevent the first attack of any fungi when taking the cutting. Never use more than is suggested on the package, otherwise it will have a detrimental effect of the rooting of your cutting. It can even rot the base of the cutting if you use too much.