Perennials are one of the most versatile groups of plants that can be used in the garden. Other than the range of colours in many assorted types of flowers, many perennials can be grown just for their foliage effect.

Most of the Perennials used in the garden are hardy perennials - even if they die down each year. They will be back the following year - more robust and with more flowers! That is why they are known as 'Herbaceous Perennials'.

Perennials have the widest range of foliage effects, so suited to all types of garden situations. They are economic - lasting for many years - often for the price of a single bedding plant, such as a geranium - or even a petunia. 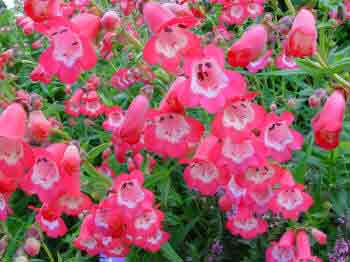 You do not have to be put of with visions of huge perennial borders. Even the smallest of gardens can be home to a multitude of assorted perennial plants.

Whilst there is nothing quite like the majestic swathe of colours and form to be seen in many of the large herbaceous perennial borders of large gardens and stately homes, there is absolutely no reason why perennials should not form the basis of successful and colourful gardening. Mix perennials with shrubs, add a few bedding plants and bulb and you have the gardening utopia - so often sought , but rarely realised - colour and interest for twelve months of the year!

Historically, gardens were almost always 'perennial' with no access to the wide range of bedding plants now available. Perennials include bulbs and shrubs, but there are dedicated areas of the website to deal with those plants.

We hope to have one of the largest and most informative databases of perennial plants for the uk, and have started working to that end.

The writer has first hand working knowledge of many perennials, together with which he has spent many hours (years?) of his life photographing them. His photos have been and still are being used in newspapers, magazines, books and scientific tracts.