This decking sub deck frame differs to most in that the client decided that they wanted the deckboards running away from the house. The change of decision came after the initial frame had been started and concreted into the ground. As luck would have it, there was sufficient clearance room rto add and extra 4in (100mm) to the height of the envisaged deck.

An additional set of decking joist were affixed to the top of the basic frame, running across the house so that the client's desire could be accommodated without too much additional work involved. It also made for an even stronger deck base - and with a little bit more room underneath for envisaged storage under the deck.

All joists and bearers were treated with Tanalith at source - giving a 15 year plus lifetime. 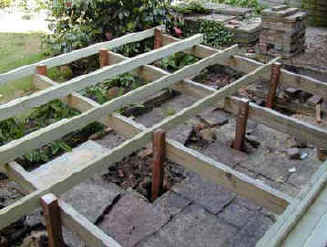 The bolts used for this M12 galvanised coach bolts with large square plate washers on the end where the nuts were affixed. No bolts were over-tightened - a common fault with some decking, bearing in mind that the timber used was kiln dried, and would expand once wet. Over-tightening of the bolts would then lead to the bolt heads biting into the timber, and in extreme cases could result in the bearers or joists splitting under the pressure.

Bottom image shows the fixing to the concreted uprights of the main bearers, which were then added to with other joists to allow the change of finished direction to the deckboards. 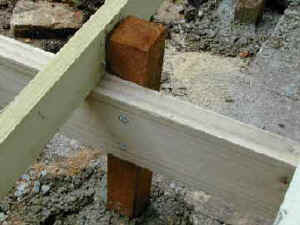 The upright support timbers were treated 4x4 (100x100mm) fencing posts with 15 year exterior guarantee against rot. All bolt hole were treated with preservative after boring to minimise the risk of decay around the bolt fixing.

Image shows the wet pour concrete used for fixing the uprights. This allows the frame to be fully stabilised once positioned axactly. Care should be taken in this initial set up of the deck frame with particular attention to the overall dimensions, the 'squaring' of the frame and due allowance made for the depth of the deck-board to be fixed on top.

As is normal for this type of deck, softwood timbers were used in the frame joist, bearers and of course the actual finishings with deck boards and balustrade surrounds. Softwood timber is easier to work, and can still look good with very little difference from some of the hardwood deck boards.