This decking project it for a slightly raised veranda deck adjacent to the house. The main purpose was to give added space that could actually be used. before the deck, there was an old patio which could only be accessed by steep steps from the house, and had a surrounding retaining wall - double - that doubled as a poor planting area.

The other consideration was to get rid of the existing patio that had been poorly laid, and offer additional space near the house which could be used for recreation. Both clients had very busy job-styles, and needed the opportunity when time allowed, to simply chill out! 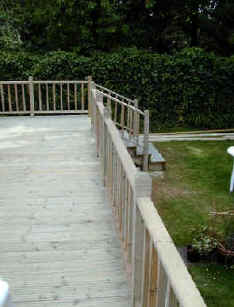 We start with a few images of the finished project so that you can then see what was being aimed for in the work and planning that lead to these.

All of the timbers were bought from local supplies including builder's merchant and nearby DIY stores. The deck is not beyond the scope of any good handyman, though a basic thorough knowledge of carpentry tools and how to use them is essential. So too is the use of heavy duty power drill for house fixings and deck base bolting.

The most difficult job would be the purpose made railing balustrade. Shop bought unis by way of spindles and top and bottom rails were used throughout.

Raised Garden Deck - near finished - with handrail balustrade and steps down to garden.

Steps down to garden from raised decking patio 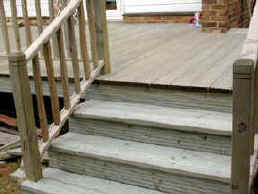 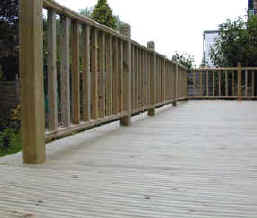 The basic rule for decking as with most DIY jobs is, if you are not sure - STOP. Do your research and then go ahead. Mistakes can be at least expensive; at worse dangerous!.

Even though this deck was only slightly raised - and also had wall supports to help - both at the house and deck edge by way of old patio wall - it was treated in the same manner as higher raised deck - with modifications.

All timber used was pressure treated at source, and all resulting cut were either treated with liberal coats of preservative, or where necessary - 'End Seal' fluid.