Tuberous Begonias are tender perennials that will need to be moved indoors for the winter months and stored as dormant tubers.

They cannot be left to overwinter in the garden or containers, unless you are living in a part of the world that no cold winters.

Dormancy of the tuber is an important part of the growth cycle of the tuberous Begonias, and care should be taken not to break that dormancy during the winter months. 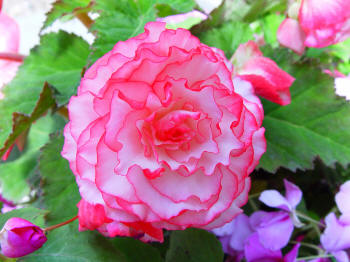 If digging up begonias from garden beds, then the plants should be allowed to die off naturally in frost free conditions. Best done by keeping the begonias in full light and warmth, potted in dry peat or compost, and all flowers removed. The foliage will gradually turn yellow, fade, then dry out completely.

In warmer areas, the Begonia tubers will probably start their dormancy period as the days get shorter. They are affected by day length.

When digging the tubers/plants out of the garden, remove as much soil as possible from the tuber, and also brush off any of the fibrous roots that are attached to the tuber.

Inspect the tubers for any sign of damage or rot, and cut out any affected areas. Dust the cutaway areas with Yellow Sulphur.

Storage of Tubers for the Winter.

The dried tubers can then be prepared for storing - in dormant state - for the winter months. This is done by simply placing the dried tubers in a cardboard box or a wooden seed tray, and placing in a dark place - frost free and not heated.

They should not be covered with compost - though a sheet of old newspaper will do no harm.

Inspects the dried tubers weekly, to ensure no signs of rotting or pests that may be over-wintering. If any rotting is found, then cut away the affected parts, allow the cuts to dry and dust with Yellow Sulphur powder.

For Tuberous Begonias which have been pot grown, then simply lay the pot on its side to allow compost and tuber to dry out. It can then either be removed, or left in the pot, and re-started again in the spring - in the same pot, but with a little fresh compost added. Be on the lookout for Vine Weevil Beetle Larvae if storing in this manner, and in any event, if said p[ests are a particular problem in your garden area, then remove the tubers from the soils and treat as above.

Restart you begonias into growth the following spring - ready to take cuttings if required - or for planting back out into the garden when the time is right.