There are several ways to propagate Begonias that are grown from tubers.

All are relatively easy, but will require the heat of a heated propagator, or at least a heated greenhouse - unless attempted indoors in the late spring or summer.

Starting tuberous begonias from seed is certainly an option, but will take time and expertise to bring the seedlings to flowering plant size.

A very successful way of propagating Begonias - and ensuring a true to type plant - is by stem cuttings. 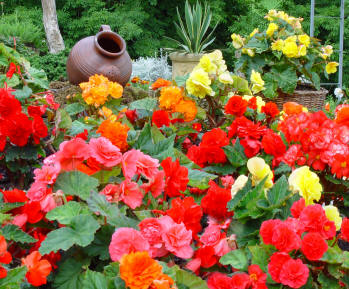 Stem cutting of tuberous begonias are normally taken early in the year - and after the tuber has been forced into growth with gentle heat - much as is the requirement for starting tubers into growth for planting. The young growths are simply cut from the forced tuber and inserted into either single pots or by numbers into a seed tray or propagator. The cuttings will be no more than a couple of inches long at this stage, with barely a proper pair of leaves showing.

The cuttings should be slightly shaded, and not in direct sun. A sheet of milky which plastic will provide enough protection from directs sunshine. If you have such a bag, then the pots of cuttings can be placed inside and the bag tied closed to keep airtight.

Gentle bottom heat is the best growing conditions to get the stem cuttings to root. Once the cutting has rooted, then bring into open air in gentle stages to allow the cutting to acclimatise to the new conditions. Feed weekly with dilute liquid fertiliser to keep the rooted cutting growing well. this is particularly important, for the early start and good growing conditions are required in order for the new plant to produce a tuber - which is required for winter storage. Cuttings taken later in the year, will not produce a suitable tuber at the base, so are difficult to keep over winter.

The rooted begonia cuttings can be grown in the same as tubers in the normal way - either as young begonias in the garden, container or hanging basket.

Most tuberous Begonias can be grown from leaf cuttings in one of two ways.

Care is required at all stages to prevent rot, but cutting the tubers into sections can also be a method for producing new plants. This is not the best way to simply multiply your stock, but rather as a rescue attempt with partially rotted or diseased tubers.

With affected tubers, cut the 'good' part from the rotted section, dust with yellow sulphur powder to inhibit rotting, and allow to fully dry and heal. (This should be dome in the dormant period, though can also be carried out on tubers which have started into growth - but just!)

The good tuber sections can then be planted as per normal, ready for planting out into garden or container.

Seed is available for the Non-Stop type Begonias in particular. Sowing should take place in early spring in heated propagator or greenhouse. The kitchen window sill is rarely suitable for this type of seed.

Begonia seeds are very fine, and should be sown on the surface of the seed compost - not covered, though a light dressing of sifted vermiculite will help anchor the young seedlings down if applied after germination has started.

The seedlings will have to be kept growing well in heated conditions, fed and watered to ensure continued growth for a good early start. begonias started from seed sown too late in the season will rarely make good plants - or tubers - so may disappoint in the garden, and be difficult to store as dormant tubers through the winter.

Growing Begonias in the Garden | Winter Storage of Tuberous Begonias |