Foxgloves – Digitalis purpurea - are an easy to grow biennial plant with tall, showy, flower spikes of 3-5 feet (1-1.5m). Vertical versatility! Preference is for moist but not wet soil in dappled shade situation where the roots are kept cool. Plants re-seed themselves to exhibit a floral fantasy every year in early summer. Generally not troubled by rabbits or deer.

Foxgloves are one of our most popular native wildflowers in the UK, found in woodland and on roadside verges. It is also a valuable ornamental flowering plant for our gardens with its tall columns of drooping tubular-bell shaped foxglove flowers standing aloof the surrounding clear ground area. It does not live happily if crowded with other tall plants, though ground low growing plants at its base are fine.

Digitalis purpurea is the common Foxglove, having colours mainly in shades of cerise pink, though hybridization is afoot to introduce a wider range of colours. As well as being a spectacular garden plant it also has uses in herbal medicine, with the extract Digitalin, being used to regulate heart beat. Foxgloves are classed as poisonous plants if ingested – as are many other garden plants – with severe stomach pains needing prompt medical attention. 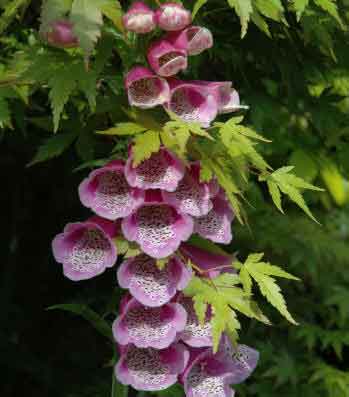 There are several cultivated strains available with subtle colour changes, or claims to being true perennials.

Foxgloves are members of the Scrophulariaceae family – most of which have the characteristic tubular flowers normally attractive to flying insects – bees in particular. The foliage is normally a dense - but not invasive – rosette cluster of leaves at the base – which also provides good ground cover.

The erect flower stems of the Foxgloves are striking in late spring or early summer often growing to height of more than 3 feet (1m) with the drooping flowers covering most of the upright stems – usually on one side rather than all around the stem. The foxglove flowers are normally spotted with purple splashes on the inside of the tubular flowers which generally have a pair of protruding ‘lips’ at the lower part of the flower which provide a useful landing pad for flying insects to land upon.

Foxgloves can be grown in drifts in meadow-type situations or light woodland. They are also suitable plants for most types of borders where a bit of height is needed from the tall spires of flowers. Digitalis have a wide range of habitats where they can naturalise. I have seen them growing on dry-stone walls, in meadows, light woodland, together with mixed or perennial borders or even as stand-alone features in a dappled shade area.

Digitalis can either be treated as short-lived perennials or better, as biennials. Often mistaken as being true long term perennials for they will appear and multiply - each year, being freely self seeding in most conditions.

How to Grow Foxglove Plants 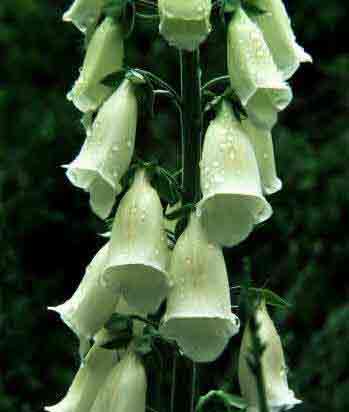 Foxgloves can either be treated as short-life perennials by cutting off the flower spikes as soon as finished, or as biennials, by leaving the flower spikes to produce seed which they will be happy to broadcast in the immediate area and produce a succession of young plants each year.

If growing from seed at the start, then allow the new plants a full growing season before expecting the flowers in the next year, However, early spring sown plants will provide a few flower spikes in the same year.(Not dependable).

Water well – but not often – in driest of summers. Do not feed, other than mulching the general area where you are growing Foxglove plants.

Where to Grow Digitalis Foxglove Flowers

Most places in the garden are suitable for growing Foxglove plants other than deep shade and wet boggy soil. They will tolerate full sun, but light or dappled shade is the preference. Soil type is immaterial as long as it is free draining with ample organic content.

In the formal garden they can be used in bedding schemes or perennial borders – or quite spectacular in a specimen bed – perhaps with low growing protective plants such as lavender or heather.

Informal gardens can be home in a wide range of different situations. Digitalis make for good meadow or light woodland environments, together with planting amongst shrubs or perennials.

Leaf spot may be a minor problem – unnoticed generally. Powdery mildew in midsummer can also prevail. The rosette of basal foliage can be a shelter for slugs which can sometimes take a fancy to young foliage.

Though they quite easily re-seed in most areas, simply scattering seed rarely works well. It is far better to dig up the crowded self-seedlings in late autumn and re-plant where desired.

Sowing the seed on the surface of seed compost in late autumn or early spring in an unheated greenhouse or coldframe normally offers the best solution.