Powdery mildew is one of the most common of the fungal diseases, attacking a wide range of plants which include vegetables, shrubs, perennials and annual bedding plants. It is also one of the easiest diseases to spot and positively identify. “White powdery spots on plant leaves” will do nicely. I get many emails with that description every year.

In the early stages, powdery mildew may show up on leaf surfaces as small pale green spots, which soon change to the white powdery deposits giving it its common name of powdery mildew.

The generic name covers a multitude of different fungi types, but all characterised by the same appearance. The disease which affects roses is different to that which affects cucumbers but they look the same, have the same general way of attacking their particular plant type and can all be treated - or prevented - by the same methods.

It is not uncommon to have several different types of plants being affected by this fungus at the same time. For instance you may have roses and pansies suffering the same. One has not infested the other. That which is happy to attack roses will not bother with pansies. 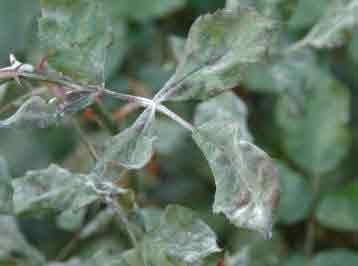 The one main thing they have in common is that they tend to infect and multiply rapidly in periods of high humidity rather than dry air conditions, though they then continue to spread in drier atmospheres. They have a higher than water content than many other fungi, which enables then to function in the driest conditions. Warm temperatures are also an important factor.

Powdery Mildew Fungus starts to become troublesome from mid spring through summer. It invariable starts of foliage it is highly unlikely to have been a problem during the winter. Once it takes a hold on plant leaves, it can also attack stems and flower buds. If it is a problem on rose foliage, it will almost certainly show up on new unopened flower buds as a white dusty coating. Likewise an infestation on grape vines will soon spread to the whole plant – including the fruit.

If allowed to develop unchecked it can soon disfigure much of the plant, including distorted leaves and twisted young stems. Not only is powdery mildew unsightly, but is also a parasite that feeds upon your plant tissue. The white powder appearance is the least of the problems, for it will be sending its feeding roots (haustoria) into the leaves and other parts of the plant literally sucking the life out of the host plant.

If you have been bothered with powdery mildew in year past, the first line of prevention is based upon garden hygiene and cleanliness. As part of the life cycle of this fungus, it needs to overwinter whilst it is dormant. This overwintering is normally enabled by the dormant fungus either staying on the live green parts of the plant – or more likely on ground debris and leaf litter under the plants. In early spring the spores are awakened and find their way to plant tissue by way of wind transportation or some insect transference methods.