Passion fruit conjures up many different feelings, but for the dedicated gardener, it is the flower rather than the fruit which is alluring. This is most certainly NOT to infer that gardeners do not have feelings of passion! Grow it as a flowering vine, and accept the fruit if they are ripe enough!

Passiflora Passion flower, Passion Vine or Granadilla to give it is common names is a superb evergreen climber with most unusual flowers which are often a talking point. It is also a favourite for the garden photographer. Passiflora is a hardier climbing vine than is generally realised with the caveat that it must be grown in the right place!

The flowers - which a moderately fragrant - are a brilliant feat of engineering and ingenuity. Alighting on the provided 'landing pad' have their back coated with pollen, and off they fly to spread life-starting pollen to other pants.

The foliage of the Passion flower is also not to be ignored, with its leathery, evergreen palmate leaves, for it gives adequate screening in most situations, though not a dense screen. 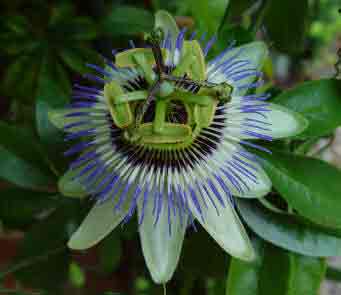 Passion flower vines climb by way of leaf tendrils which will wrap themselves around any suitable frame including sturdy trellis though not normally robust pergola beams.

Hardiness of the Passiflora seems to directly relate to age of the plant. The older it gets, to hardier it seems to be. Certainly getting the plant through the first winter is important after which it builds up it hardiness together with woody stems at the base of the vine.

Passion Fruit can grow to a height or length op up to 15 metres (45 feet). (10 metres seems to be the norm). The most spectacular I have seen, was growing up a narrow trellis to the first floor of a house, then trained horizontally along galvanized wire to a total length of well over 12 metres on a sunny wall which allowed the fruit to ripen and hang along the length like small oval lanterns. In the late summer is had bright orange egg-sized fruits against dark green glossy foliage.

Care of and How to grow Passion Fruit Climbers 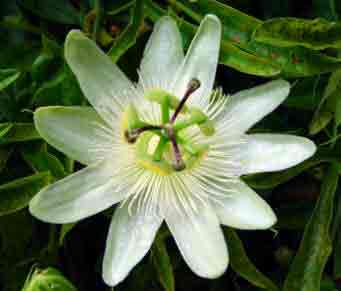 Passiflora is best planted in late spring - after the worst of the frosts have gone. This will allow it to get acclimatized to its planting position and produce some woody stems which will help it through the first winter. A sunny aspect is best especially if you are hoping to ripen the fruit but it will also grow and flower well in dappled shade.

Most garden soils will suit other than very acid soils. It grows particularly well in neutral or even alkaline soils. Avoid areas which are prone to flooding or permanent sogginess through the winter. Well drained soils are the best.

It climbs by way of tendrils which after they have got hold of a support will rarely need any tying in, though training of the young stems will be required unless there is room for them to wander freely which they will soon do. In spite of this, Passion Fruit plant is not particularly invasive.

It is quite a quick growing climbing vine and will soon cover a 6x6ft trellis in the first year.

Passion fruit plants can be planted in a decent sized container and grown therein for 5 6 years before it will require re-potting up to a larger pot or tub. Position the container where it will have shade from the midday sun, or position a few shrubs around to avoid the soil in the pot becoming baked.

There are no problems other than a few aphids when grown outdoors in the garden. Indoor or conservatory grown plants can be infested with whitefly, scale insects and red spider mite in particular.

Dying back somewhat in harsh winters often re-sprouting from the base and making up grow from the late spring.

The can be grown from seed though dont be tempted to save seed from fruit bought for consumption. Not normally from hardy varieties.

Easiest way to strike a few extra plants is by simple layering of a few stems in either spring or early autumn. They will soon root well enough to be removed from the parent plant; potted and grown on until a suitable planting time (spring).

Semi-ripe cuttings in Late summer is the other option.