Dahlia Tubers - How to Plant dahlia bulbs and Grow Them.

A dahlia tuber is a root that has been modified by the plant to store food for when it is resting – in the winter!

Dahlias are one of the most colourful plants for late summer flowering in the garden.

Here we are talking of the Dahlia that are grown from tubers, and not the smaller bedding dahlias - though they are also fine flowering plants for late summer flowering. Most of the bedding Dahlias, grow from a fibrous root system and do not produce tubers. They are not true bulbs, but fall in this category of bulb-type plants.

Dahlia flowers are the mainstay of the late garden flower shows, where perfectly grown specimens can be seen as cut flowers - awaiting the verdict of the flower judges - who may decide that some are not quite as perfect as the exhibitor might have thought!

Just a small selection of the Dahlia flower types and colours that brighten up the garden from late summer until the firsts of the autumn frosts. This selection should get you planting dahlia bulbs for a summer spectacular. 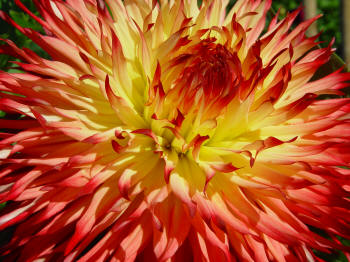 Dahlias are grouped into categories - for the enthusiast - by the types of flower heads - the larges of which can be an awesome 10in across! At the other end of the scale are the Pompom types that are simply an inch or so across. There are huge size differences within the same group or classification - with some of the normally petite Pompoms being 4-5in across.

The fiery specimen above would fit into the Cactus category (In my opinion!)

(I am happy to be corrected, by any Dahlia enthusiasts or exhibitor who may feel that my classifications are wrong. They are simply to guide those who wish toy grow Dahlias in their garden borders for late flush of colour - or maybe for cutting off for the floral arrangement indoors.)

Dahlias are normally bought from the garden centre shelves as pre-packed tuber clusters with a descriptive colour label during late winter or very early spring. They tend to sell out very quickly - because of their popularity and also because of the very colourful picture labels attached to the pack. They are normally in plastic bag packs - perforated - and contain a single tuber to which a portion of stem with the all important bud is attached. Some varieties may have more than one tuber per pack. However, if the additional tubers are attached to the same flower bud portion of the stem, then it is still one plant that you are buying!

Planting the Dahlia Tubers - The tubers can be planted in a container of compost in a heated greenhouse in early spring, and grown on until ready to be planted out in the garden when ALL DANGER of Frost is passed. Dahlias are tender plants, and will not withstand any frost or even cold conditions. Don't be tempted into planting dahlia bulbs too early.

If planted in a garden bed or border, then use plenty of potting compost in the planting hole.

Alternatively, the tubers can be simply stored in frost free conditions until late May, when they can be planted out in the garden bed or border. When planting dahlia bulbs in this way, try to ensure that the tuber section is completely buried, with the old stem and bud just below the surface of the soil. It would be good thinking to provide a suitable stake at planting time. This will prevent damage when trying to drive a stake down through the developing tubers later on in the year, and will also help you recognise where the dahlias have been planted. The larger growing types normally need a stake that is 1in square. 'Dahlia Stakes' are available at your garden centre. Bamboo canes are not normally sturdy enough.

Once the dormant tubers start to grow into plants, be prepared for any late frost warnings and protect if forecast. Sheets of newspaper anchored down will do the trick for mild frosts, whereas horticultural fleece will be better. Otherwise simply 'earth up' the emerging greenery with potting compost until frosts are no longer a problem.

Dahlias are gross feeders, and will benefit from regular weekly liquid feeding. The plants will soon grow to around a meter high with a spread of around half of that! Allow space for getting between them for general tending. Do not tie the central stem too tightly - it will get wider as it grows!

If you are simply growing your Dahlias for garden colour, then just let the Dahlia plant take its chosen mode of growth - which is with a main central stem cluster from which several side-shoots will grow. The central stem can be 'stopped' - pinched out to help the plant produce more side shoots and a bushier plant. The more shoots the better. This ensures a good supply of flowers. If you are growing your Dahlias for exhibition, then I will not be condescending and try to tell you how to do it. I have done enough dahlia judging at Autumn shows to realise how the winners have their own special ways of growing their plants into prize winning specimens.
If you wish to partly emulate the exhibitors, then you will simply allow two or three flowers per stem, and pinch off the two smaller buds that will develop at the base of the main flower stalk.
It is fun if nothing else, to try your hand at producing larger blooms - especially with the Cactus types! Otherwise, let all flowerbuds develop for the best results in the garden.

Problems and Pests of Dahlias

Dahlias are not without a string of problems and pests. But these can generally be kept at bay by the watchful gardener.

Keeping Dahlias Through the Winter | Propagation of Dahlia Cuttings |