Mulching and Organic Mulches for the Garden


Mulching the soil in the garden is one of the most positive things you can do to improve soil fertility, conserve moisture and help your plants grow well. It is also an environmentally friendly activity and is the basis of a good organic approach to growing. It is one of the basic ways in which plant life in the wild provides its own food, and ensures its own survival.

The never ending provision and recycling of fallen leaves and other decaying organic matter provides nutrients for the plant’s continuing survival.  All are returned to the soil surface, from there into the soil, are broken down by various soil organisms and turned into food for the plant to absorb. Other than water and possibly nitrogen from the air, it is all that plants need to continue life. 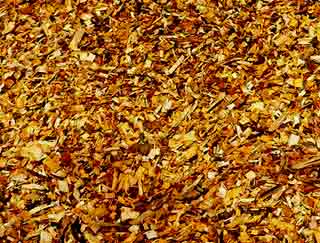 Mulch is basically a layer of material placed on top of the garden soil. It can be a partial mulch - around the base of a prized shrub for instance; a covering for a shrub or herbaceous border; a covering of organic material on a vegetable plot - either for specific plants, such as around marrows and other cucurbits, or it can be a layer of material that is used to suppress, or maybe kill, stubborn weeds. Peat is a suitable mulch, but has to be applied at some depth.

All manner of materials can be used for a wide range of applications and eventual outcomes, but are normally split into two distinct groupings, being organic mulches or synthetic coverings.  Mulches can either be for ornamental use, or for a cultural use.

Many types of mulch are duo purpose, in that they can be used as an ornamental covering or strictly for cultivation reasons. Many ornamental mulches will also add to the cultivation aspect, as they break down - decompose - over time. There are those of us who would think that all mulches look good, so are in themselves ornamental as well!

One of the royal gardeners I once knew claimed that he never wanted to see bare earth. The fact that a large stable was also to hand, helped him in his aim.

What does mulching achieve?

Organic mulches - simply laid on the soil - will eventually be broken down and taken into the earth where the material is further broken down by the myriad of soil organisms that exist simply for that purpose. It is a natural process that has been going on since plants started to live.

Earthworms are instrumental in the process - taking dead and decaying matter into the soil. Once broken down in the soil, the organic matter is generally classed as humus - a vital substance for the building up of a rich fertile soil.

As well as the soil improvement aspects of organic mulch, there are several other advantages, such as the conservation of soil moisture; the  keeping down of weeds, and very important, the improved  structure of all soil types, including heavy clay and light sandy soils..