‘Angels’ trumpets’ is the apt common name for the group of evergreen shrubs from the Brugmansia group in the Solanaceae family. The common name is derived from the spectacular drooping pendant trumpet-like flowers which come in a range of colours – originally white but now hybridized into yellow and orange shades. The individual flowers can reach 10-12in (30) long and often cover most of the shrub from the mid and upper branches in a stunning display for much of the mid to late summer months.

As if the floral display were not enough to tempt you, the flowers are normally scented – particularly in early mornings and evenings. Not a strong heady scent, but enough to be described as being fragrant, or at least scented.

Whilst the Brugmansia’s origins are cited as being the South Americas, some of the best groups I have encountered have been on the cold slopes of mountainous areas of Northern Thailand – areas where I have been pleased to have been wearing a fleece top. 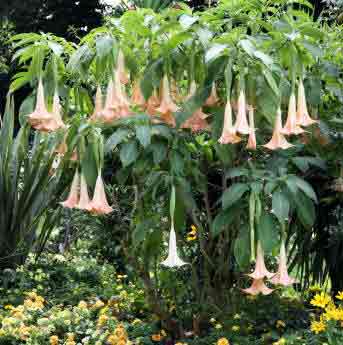 Brugmansia are large flowering shrubs with variable hardiness, and certainly not advisable outdoors in colder regions. One advantage being that they can be container grown – so can be moved to protected areas in the winter. Bear in mind that they are happy to grow to 6 – 10 feet in warmer areas so will need a large container – or restriction of size. In tropical climates Angels’ Trumpet can grow much larger – to 15ft (5m) or so.

Angels’ Trumpet grows from a central stem with a branching habit from near to ground level allowing the shrub – or small tree – to develop into an upright, open shape which is quite densely clothed in the large leaves which are generally course texture and light green.

Confusion reigns as is the horticultural norm regards naming. Brugmansia are often wrongly described or sold as Datura – often Datura splendens. They are not Datura – which is an herbaceous perennial and has upright trumpet flowers; Brugmansia are evergreen flowering shrubs, with pendulous trumpets..

How to Grow and Care for Brugmansia Plants

In the open garden, Brugmansia should be grown in a low or non-frost area as they are not fully frost hardy – certainly not in the first few years after planting. They develop a little hardiness with age – but do not be complacent. Losing a fine specimen in a harsh winter is not good.

Full sun; in a sheltered position; and most soils – which should be well drained and not prone to holding water at the roots.

Allow space – not only for the visual effect for you certainly would not want to crowd this stunning shrub – but also for the fact that it can easily attain a height of 2-3 metres in one growing season even when grounded in the winter.

A good covering of free draining organic mulch each autumn will do much to prevent root damage from penetrating frosts.

If there is any die-back during the winter – likely – then either trim off the withered stems to good growth, ar adopt a regime of hard pruning each spring.

All of the above applies with the addition of choosing a large container if you want a large specimen. A container up to 2ft (60cm) is ideal to get the most spectacular ‘outdoor pot plant’. Be aware that you may have to move it from prime summer position to a sheltered place for winter.

Use a soil based compost with added organic material such as peat, garden compost, leaf mould or coir. Add a long term feed such as Osmocote each spring – and be aware of how much water the large leaves will need to remain turgid.

If grown outdoors there a few if any pests or diseases. Indoors - such as a conservatory - will invite attention from red spider mites. Aphids such as mealy bug or scale insects may also be troublesome.

All parts of the Brugmansia are poisonous if ingested – as with most members of the Solanaceae family.

Can be grown from seed – if available – but best from semi-ripe cuttings which will need a large clear airtight bag over top until rooted. (Not easy)

Brugmansia arborea (Tree-like) is the grand-daddy of them all, with white scented Angels’ Trumpet flowers.

Brugmansia sanguinea has flowers opening to red lips, spectacular but loses out on scent.

Brugmansia x candida has some of the largest flowers – up to 18in (45cm) long, with scent and a range of flower colours in various hybrids of the type.