In keeping with the general ease of maintaining and growing good Mahonia shrubs, the pruning aspect is well laid back and not always necessary. That’s in ideal circumstances of course and experience has taught me that ‘ideal situations’ do not always exist in gardening.

There are basically two different classes of Mahonias. The Mahonia aquifolium types are the lower growing spring flowering evergreens that find their way into public planting schemes because of their ultra hardy nature. No less hardy are the Mahonia x media types – Mahonia Charity being a popular example. These are used in larger landscape schemes and more popular in larger gardens or woodland settings being taller growing specimens than the lower growing Mahonias. 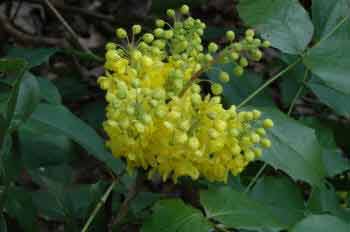 Pruning Mahonia aquifolium; Mahonia repens; Mahonia wagneri types and all the lower growing Mahonias, which are sometimes referred to as Oregon Grape Mahonias.

(In reality the Oregon Grape is the common name for the Mahonia aquifolium only) This group normally grows to around 1m tall though some can reach up to 1.5m over time with a similar spread.

These Mahonias require the minimum of pruning attention – unless of course they were planted in the wrong place and have outgrown their home. This group flower later that the taller varieties which tend to flower in early winter, so should ideally be pruned right after flowering if requires. If grown as a ground cover mass, a light trimming will normally do the trick.

If grown as specimens in the shrub border, then pruning should simply be taking off the dead flowers unless you want the fruit to develop – either for birds or for self seeding. If these are getting too large, pruning can take place in stages by cutting some of the longer branches or shoots down to near ground level where they will soon develop new growth which will develop and flower the following year providing any pruning is carried out right after flowering. 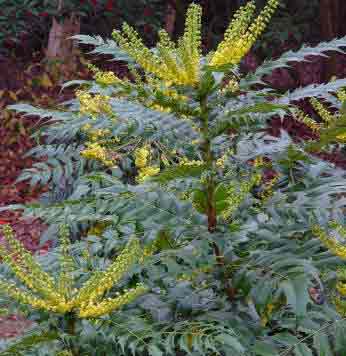 This group encompasses those that normally grow upright with clumps of long canes having the long pinnate leaves forming a top canopy. Flowering generally takes place in early winter – November/December.

Mahonia x media types including ‘Charity’ ‘Buckland’, ‘ Winter Sun’, ‘Lionel Fortescue’ and others together with japonica, bealei, lomariifolia, are virtually self-pruning. The flower heads soon develop into racemes of seeds which invariably fall off as the new leaves and growth near the top pushes out and upwards.

However, left un-pruned some of the varieties will grow to 2m over time. A splendid sight if you have the room to accommodate one. The best way forward is to cut out one in three stems each year – as soon as possible in early spring after flowering. Some of the canes can be cut back half way or to within 60cm of the ground, or alternatively down nearer to ground level.

With both the lower and taller growing types – it is essential that any required pruning should take place immediately after flowering. This then allows time for the new shoots to re-grow and mature during the summer – producing flower bud for the next flowering season.