Earthworms in the garden - in lawns and grass

Look after the Earthworm - it is your friend! 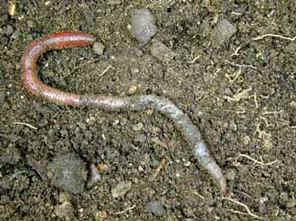 I have lectured on the subject of  Earthworms - worms - (Lumbricus terrestris or Helodrilus caliginosus - the smaller ones.), but it was not until I moved house to an area with very little top-soil - the North Downs in Kent - that I fully appreciated their true worth of earthworms.  The few centimetres of top-soil there - over several metres depth of chalk - was impossible to dig, without bringing the chalk to the top.

Earthworms changed that soil for me over the course of five or so years. All I had to do was to feed them - with a generous organic mulch each year! After these few years, I could simply slide a fork into the soil. No more 'digging' for me, whilst there is an army of 'helpers' willing to do the job!

Some people believe that earthworms are harmful. Totally untrue!
Earthworms pull partly-decomposed organic material down into the soil for a good feast. The organic matter is then broken down further in the earthworm, before being excreted as 'worm casts'. These are easily converted into nutrients by the soil's micro-organisms. The nutrients are readily taken up by developing plants.

Worm casts in the garden, have a nutrient level and organic matter level much higher than that of the surrounding soil. Each day worms produce nitrogen, phosphorous, potassium, calcium carbonate and many micro nutrients in a form that all plants can use.

A small 400 sq ft garden with a low worm population of only 5 worms/cubic foot will be provided with over 600 lbs (about 1/3 lb per worm) of top-grade fertilizer by the worms, each year.

They can also help to bring an acid soil back to a more neutral ph over time. Their casts contain calcium carbonate.

Lawns - A right pain in the grass
Worms can be a bit of a pain in nicely manicured lawns when they leave their worm casts all over the place - normally in the autumn. Even so, I would not advocate any chemical control for worms in the grass areas!. Boxing clippings from the lawn will go some way to lessen the problem - the worms thrive upon them. However, even the best tended lawns have an adequate supply of dead and rotten grass just below the green sward for worms to feed upon.  They seem to prefer alkaline rather than acid soils (on lawns at any rate), so long term applications of high nitrogen fertilizers will help.
The best way to get rid of worm cast, is by brushing them off - when they are dry. A wire rake is good for this - better than a brush. Or if you have a large lawn, a 'drag-mat' made from wire mesh is a good idea. The earthworms that throw casts in the lawn, are not beneficial insofar as drainage and aeration are concerned.

Organic matter eaten by earthworms consists of rotting plant material and animal parts. They also eat soil harmful micro-organisms such as bacteria, fungi, and nematodes. Earthworms will feed on roots or other parts of plants that have been decayed by other organisms; but they do not feed on healthy plants.

Earthworms are generally found in the top 10 0r so few centimetres of the soil. They breath through their skin and therefore need a moist environment, so if the soil dries excessively, they will burrow deeper. (Up to 2 metres)  They are basically nocturnal - coming to the surface at night when temperatures are lower and humidity higher.
Sandy and acidic soils are their least favourite habitats.

In addition to recycling organic matter, worms are great for improving soil structure - as I found out! Their borrowing action helps to improve aeration, moisture retention, and water penetration.

So, if you want more earthworms - apply regular dressings of organic matter mulch to the top surface of your garden. The worms will do the digging for you!