Tulips - Tulipa - How to grow Tulips.


The Tulip is second only in popularity to that of the Lily. Who says so? YOU dear visitor. For there are around 1.2 million searches each month on the keyword Tulip (1.5 million if you amalgamate the Tulip and Tulipa searches). It seems that you are intent upon planting tulip bulbs

Against that number, we have searches totalling 2.7 million for the term Lilies. 'Lily' is even greater with around 3.2 million searches each month - but this will include many pages which are not about the garden Lily, but of songs, books and names.

Enough to say now, that the Tulip is still a very popular garden bulb. Coincidence maybe, that it is of the same family as the Lily - Liliaceae.

When you consider the huge range of colours within the Tulip group, from the most flamboyant pinks to the deepest red; the palest of yellows (Cream or white if you must) to the richest gold; and the most subtle lilac through to deep blue or purple. Then you can start to appreciate why this is such a much planted bulb - especially in Europe where planting tulip bulbs is more popular than our beloved daffodils.. 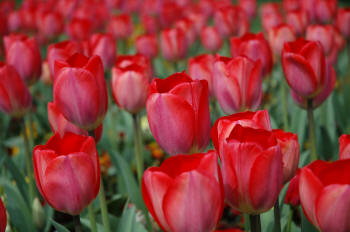 The truly black tulip still evades hybridisation - even if there are tulip names that suggest otherwise - 'Queen of the Night' for instance.

It is normal in UK gardens to see the main flush of tulips in May - after the daffodils have finished flowering. Whilst the daffodils are the true sign of spring, tulips in flower are the first real sign that summer is indeed just around the corner.

How to plant tulip bulbs

The tall bedding tulips with stems of up to 20in are best planted in a sheltered - but sunny - position so that they do not get battered by the slate spring winds. This is especially so as the flowers mature and open out into flat heads. Plant Tulip bulbs in a sheltered place and they will often last a few days longer than those in windy or exposed places. Once past the 'tight bud' stage, the petals are more likely to be swept off the plant by strong breezes. And this at a time of year when we want every last bit of colour.

The best time for planting tulip bulbs is in October - or even November. October being favoured, for often November is often an inhospitable month in which to do gardening of any kind. Tulips - as with most bulbs - should be planted with three times the depth of the bulb. This gives a four to five inches of soil over the top of the bulb - enough to protect it from the harshest of winters. The later planting suits tulips in that they can then start to break through the spring soil in early April - and so avoid being damaged by late hard spring frosts.

Most soils are suitable plant tulip bulbs, but well drained gritty soils are best for the dwarf rockery types such as Tulip kaufmanniana and T. greigii types. The same goes for the other tulips sold under the 'rockery' label! The dwarf exception being Tulipa tarda. This prefers a rich humus type soil - its natural habitat.

After the Tulips have Flowered.

Unlike Daffodils, Tulips are best lifted after flowering - but not until the foliage has died back. They can be left in the ground to flower in same place the following year - but with a less uniform habit of growth. Not good for bedding schemes. This is because some of the bulbs will flowers, and others will not.

Far better to lift them and let them dry  off in the sun (Ever the optimist!). Then the bulbs and attached bulblets can be sorted into size - with the largest bulbs being re-planted in the following autumn where they will most certainly flower again, but with the smaller bulbs being grown on elsewhere to turn into large bulbs for the next lifting season - one year hence. Any stray flowers on these smaller bulbs should be cut off - as tempting as it is to leave them on the bloom.

The dwarf tulips - or those simply grown in a border - can be left to re-flower the following year in the same place - providing you no not object to the attractive clump-forming habit as some of the smaller bulblets send up flower spikes as well.

If you want to grow some tulips from saved seed, no problem and easy to do. Just sow the ripe seed on the surface or lightly covered with compost. Then be prepared to wait for around 4, 5 or even 6 years before you see them flower. far better to lift them as described and grow on the smaller bulbs - for just one year!

The newly sprouted flower bulbs can be fed with a good all-purpose liquid feed, but far better to apply bonemeal at planting time in the late Autumn. Too many other things to do in early spring - so get the feeding out of the way in autumn.

Pests and Diseases of Tulips.

Greenfly and other aphids can be a little troublesome - but rarely too much of a problem. Simply wash the little bugs (!) off with a blast of the hose, or use your favoured insect spray.

A much more sinister problem is the various virus diseases that can infect - especially with bulbs that have been saved and replanted for several years. This normally shows up in the form of colour changes in the petals - normally vivid variegation or misshaped flowers. This is not to say that the many forms of variegated tulips have virus!

Tulip fire - a very descriptive name for the  consequences - can sometimes, but rarely be a problem. Take out, destroy and don't replant the areas for several years.