Eranthis - Winter Aconite - How to Grow and Care


Aconites are tuberous plants that will form clumps of attractive flowers early in the year. They will soon form perennial clumps - dying down in the summer for their dormancy period - to return in flower in the early spring or even late winter.

As well as being of good garden use, the Eranthis - or Aconites - are used in Homeopathic medicine, and also as a herb. They are all poisonous to the extent of mild stomach upsets if eaten. The sap may also cause skin allergy for some.

Aconites are quite easy to grow in most garden situations, but generally prefer a moist soil. Certainly one that does not dry right out in the summer months, so attention will need to be given to watering and or mulching for the summer months. 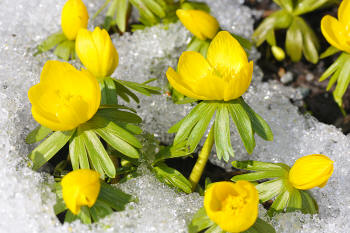 Light or woodland shade is ideal for growing Eranthis - especially suited under deciduous shrubs and trees, where there is a little shade cover in the summer. The edge of natural pools is also another spot where these are very happy. They will soon naturalise themselves and form colourful carpets of flowers and foliage. In rough grown grass areas that can be naturalised - but not in regularly mown lawn areas.

Most of the Eranthis have golden yellow flowers - with one exception as below in the list of varieties. The foliage is attractive - at flowering time and just after. Foliage on all Eranthis is either lobed palmate leaves or even dissected leaves.

The flowers will be just a few in above the ground, so planting in frontal positions is necessary for show.

The tubers of Aconites should be planted in the autumn to a depth of no more than 2-3in. If the tubers are dried out, then difficulty may be experienced in establishment. Soak dry tubers for up to a day before planting. For drifts to establish quickly, plant the tubers at a distance of 9in, and lift and divide the tubers in year two after planting. Eranthis are fully hardy - other than if dried out too much in Summer. I have seen Aconites flowering in periods of snow, will just the slightest of petal damage.

Aconites will give a welcome splash of colour if planted in association with early flowering shrubs such as winter-flowering heather. Ensure that the Eranthis are not swamped by the growth of the more vigorous plants in this case.

Aconites can be grown easily from seed - harvested as soon as ripe, and sown immediately. Place the seed tray in a sheltered position where it will not be hit by direct sun. A cold frame is ideal. My favourite spot for this type of seed sowing, is at the foot of a Leylandii or other hedge, with a sheet of class over the top of the seed tray. Cool, moist, and away from direct sun!

Problems and Pests of Aconites.

As ever, slugs are on the prowl for any young tender foliage in the early spring. They seem to ignore the flowers. The foliage can be affected by smutty fungus, which rarely does lasting harm.

As with all common names of plants, there is often confusion as to what the real scientific plant name is. Aconitum (Monkshood) are also known commonly as Aconites, and whilst in the same family of Ranunculaceae, they are very different insofar as any herbal use is concerned. do NOT attempt to use any Aconite sourced from a garden, but use that supplied by a qualified herbalist.

Species or Types of Eranthis.