Cardiocrinums are often known as Giant Lilies, for they resemble - closely - the flowers and habit of their parent family - Liliaceae. Like the Lilies, they are summer flowering.

Cardiocrinums have the typical trumpet flower of the lily, but with different foliage - being heart shaped and sometimes attractively veined.

As well as having the gorgeous lily-like flowers of the trumpet lilies, the Cardiocrinum has spectacular seed heads which persist well into the winter, and are are sought after by all manner of garden birds.

A frosted seedhead - or better still, a snow-clad Cardiocrinum seed head is a welcome addition to the autumn and winter collection of useful 'dead' plants! No worries, for below the soil, the bulb of the Cardiocrinum lives on, ready to sprout forth next spring season. 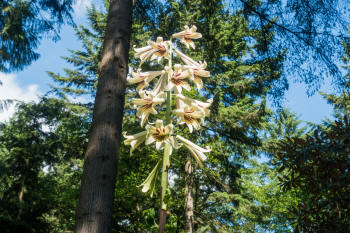 Cardiocrinums are generally hardy, but may suffer a little frost damage with late spring frosts. Well worth protecting with horticultural fleece for late frost periods - or even a few conifer cut-offs placed against the emerging stem and foliage. The attractive foliage hearts are well worth the trouble. Depending upon variety, the leaves can be up to 18in (45cms)long - quite distinct from the closely related Lilies.

Cardiocrinum bulbs are normally available in early autumn, and should be planted right away. Plant with just a little soil over the top of the bulb. Some suggest leaving the nose of the bulb just proud of the soil surface. This is a mistake and that advice should not be followed.

Cardiocrinums should be planted in an open aspect, but sheltered from strong winds. If a very exposed aspect, then a cane should be inserted next to the bulb at planting time, taking care not to spear the bulb. This will also serve as a marker for the rest of its dormant period. Bear in mind that Cardiocrinum giganteum in particular, can attain a height of 2 - 4 metres. Yes that's right - in feet that is equal to 6 to 12 feet!!! A plant to look up to in many ways.

There is much to be said for planting smaller bulbs which have yet to reach flowering times. The large bulbs on offer in the autumn, will be hard done by to produce the roots required before early summer when the plant starts its upward journey. Plenty of water in dry periods is one of the requirements for success in the first year. Pot grown bulbs are sometimes available and would be a preferable option - with roots already formed.

Cardiocrinums are not suited to growing in containers - though I have actually seen well cared for plants grown in this manner.

Light shade is preferred, but full sun will do no harm. Planting soil is preferably a rich loam - enriched with organic material such as compost. Cardiocrinums respond well to being looked after, and thought should always be given to later years for this group of bulbs, for the will become more spectacular as the years roll on. Regular annual dressings of mulch in the autumn and bone meal in the early spring will be beneficial.

Seed can be collected, and should be sown in a container placed in a cold frame. Young seedlings should emerge the following spring, but the bulbs will take time to form, and it will normally be around five-six years before you see flowers - maybe longer.

Far better to remove the offsets that will have formed right after flowering. Again, these are a long term project, and will normally take four or five years to reach flowering size. Do take care of them as above during your long wait.

The young foliage in the spring, will attract hungry slugs, and later in the summer Lily beetles have been known to be problematic. Otherwise - time is the essential ingredient.

There are just a few Cardiocrinums that are generally available - the most obtainable being ....

The Cardiocrinum is a 'must have' bulbous plant for your collection, but be prepared to give it a little fuss and attention over the years for best and consistent results.