Canna Lilies - as they are often called - are not true lilies. Cannas are produced from Rhizomes and are herbaceous perennials. Canna lily bulbs - as they are often wrongly called - die down each year and are stored for the winter in a dormant state - to be started back into growth the following spring.

They are classed as half hardy, so are not suited to leaving in the ground to overwinter - other than in the warmest countries, where they often grow as wild plants.

The Cannas get their common name from the fact that the seeds are hard - like pellets. As such, they were used as ammunition - stuffed down the barrels of musket rifles when lead shot pellets were scarce!  The hard seed coats present a few problems in the propagation of Canna lily bulbs from seeds. 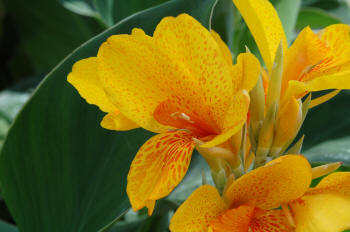 Cannas are spectacular garden plants - flowering from mid-summer through until the autumn. As well as a wide range of flower colours, there are several with coloured foliage - the large leaves being either bronze or striped.

Truly a tropical plant, cannas will add height and interest to a herbaceous border, or in a bed to themselves.

The flowers are produced at the top of the plant, atop the large leaves produced on a tall central stem. The foliage in itself is a feature, but it is the flowers that are the ultimate attraction.

The natural habitat of the Canna Lily bulbs, being moist areas in Asia and South America. In Thailand, they are often to be seen growing at the water's edge of streams. Many growers grow them in watertight containers - with a mud base, but totally submersed in water. In spite of their natural liking for damp conditions, they will survive - if not thrive - and any sunny area - dry or damp.

Cannas are often seen in public park's bedding schemes, used as central interest points. Most gardens that are open to the public now use Cannas extensively.

Cannas in Containers and Pots.

Cannas are quite happy to be grown in patio containers, but because of their eventual height - up to a metre or more - a large pot is necessary with plenty of weight to ensure that it is not toppled in windy conditions. The large leaves of the cannas literally act as sails, and as such, sometimes suffer a little 'shredding' in high winds.

General Cultivation and Care of Cannas

There is a wide range of foliage colours within the Canna Dynasty - best seen if grown in sunny but sheltered from wind - areas. Colours range from the light green and yellow variegation through to the deepest bronze. All have flowers that are not unlike large gladiolus flowers, with a similar range of flower colours. The flowers range from yellows, light pink through to deepest red.

Canna Lily Bulbs are normally bought as Rhizomes in the dormant season. There is normally a single bulbous rhizome per pack. Either start the rhizome into growth in a warm place in late February. This is best done by planting the dormant Canna in a pot with compost and gentle heat to start the plant into growth. Regular watering will be needed.

Starting the Canna in this manner will allow you to plant a 'growing plant' into your garden during mid to late May - after frosts have finished. This gives the Canna a longer growing perio and a quicker maturity to flower earlier than if you simply plant the dormant rhizome into the ground in late May.

Plant the Canna in a sheltered place, to ensure maximum warmth and to alleviate any foliage damage from strong winds.

Feeding and watering Cannas. Cannas should be fed and well watered throughout the growing season, but with feeding ceasing from mid-august. Use a balanced feed, which will help the current growth, and also ensure a supply of food that will enable the rhizome to multiply into a large clump - ready to be divided and stored for the winter.

Winter Storage of Cannas should be in a cool totally frost-free environment. The lifted rhizomes will be considerably larger than the single item you purchased! the best way to over-winter, is to place the clumps of rhizomes in a box and cover with compost which can be kept mainly dry throughout the winter.

The rhizomes can then be divided in spring - it will need a sturdy knife or a couple of forks, to prize the rhizomes apart. it should be possible to get at least three new plants from your original after the first season.

Sowing seed of Cannas should take place either as soon as ripe in the Autumn, or preferably in the spring with a little heat. The hard seed will either have to be soaked for a few days prior to sowing. Alternatively the seed coat can be roughened with a piece of sandpaper or light file.